The name ·teks·sema· is made of two Indo-European root words: [teks] and [sema]. They bring to mind mental images of the ancient craft of weavers [teks], however, not a weaver that uses traditional tools to create their goods, but one that works with words as a minimal semantic unit; hence the root suffix [sema].

The name ·teks·sema· is the heart and soul of the services I offer. Therefore, the same level of professionalism has been upheld when analyzing and selecting the said name.

The name ·teks·sema· is a proparoxytone [teks-se-ma] that is characterized by its strong, notorious sound. The impact of its consonants [tkssm] is dominated by the imposing sharp, dry [tk] sound, which is partially mitigated by the double presence of the fluid and effervescent ‘s’. Regarding the vowels [eea], the name begins and ends with a full, open sound. The overall melody of the name is firm and smooth, evoking strength and stability.

How is the word ·teks·sema· formed?

The word ·teks·sema· originates from the suffixation of two Indo-European roots: [teks] and [sema]. The first, [teks], is the same root from which the different semantic decompositions of the word “text” arise, and refers to weavers, craftsmen, or builders, that is, to the creators that do not hinder creativity itself, to the ingenuity of man that is manifested in all interactive activities with their surroundings.

Furthermore, [sema] is a linguistic concept that refers to the smallest unit of meaning in which a word can be broken down into. Also, it is another Indo-European root that has given rise to a multitude of semantic decompositions in our language, specifically, the word “semantics”.

The name ·teks·sema· implies the symbolism of the ancient art of weavers [teks], but not he or she that actually uses the tools, but the creator that uses the word as a minimal semantic unit, and from there, the suffixation of the root [sema]. In fact, a text is nothing more than the result of the single units of meaning woven together.

The writer who weaves semantic units that become, after his labouring, the text. 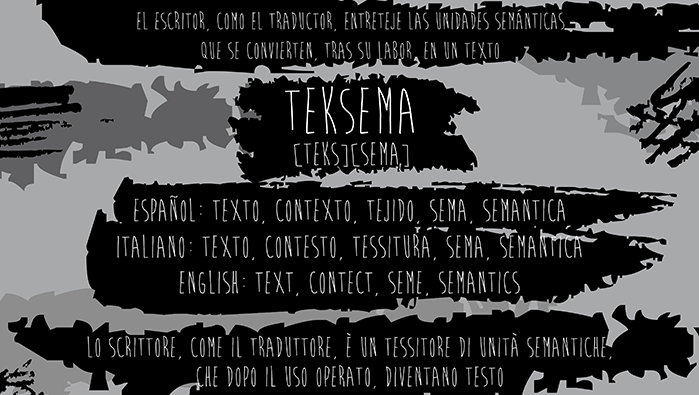